and i mean it…

Late night of September 6th, till early morning of September 7th, India and many other parts of the world was stuck to there television set to witness the historical landing of Vikram of Chandrayaan-2 on south pole of moon. There were also a whole lot of people who were working rigorously for this moon mission. I am not talking about ISRO and other involved in the mission as they are the one who were working day and night from months for this(i am in no stature to talk about them).

Well, i am talking about Indian News Media, Yes, the journalist, reporters, news anchors, people on desk and scripting, those in packaging, those working for graphics, the research team, the interns who were asked to stay in office till early morning (and interns actually love this job of high stress and uncertainty!!!)

Well, i consider my self a journalist today as well but i was literally in-front of camera from last many years till April 2018 (when i decided to run for my baby than for the politicians). There after, I regretted my decision many a times, i often feel lagging behind when my fellow journalist were pacing ahead in their career. But, this mission moon, has opened my eyes and today i am happy for what i decided a year back.

Working for media and being in-front of camera and on the television screen has never let me think from the perspective of viewers. I perceived what i was said by the editors and often argued with the people who said “tumlogon k paas alien or bandar ki shaadi k alawa koi news nahi hota”.. i argued “log jo dekhte hain hum wahi dikhte hain”… never realizing that people actually don’t want to see “Alien bhi doodh peeta hai” type news.

The recent coverage of mission Moon by Indian Television media, will force you to hide your face with both palms and i bet, you will prefer watching Saas-Bahu in Prime time than any of the news channel (which are no less than the melodrama of serials).
The media coverage of India’s maiden attempt to land on the Moon with Chandrayaan-2’s Vikram lander was a sight to behold. Even before Vikram made its unsuccessful attempt to land on the Moon’s south pole, India’s television news anchors had beaten it there, to mention few.

Aaj Tak’s attempt to make it look like the anchor Sayeed Ansari was on moon, Sayeed tried to explained the mechanics of chandrayaan-2, with tacky virtual graphics in the backdrop.

ISRO chief K. Sivan had called the period preceding the landing “15 minutes of terror”, which eventually proved to be prophetic. TV9 discussed these 15 minutes with the anchor and his two interviewees sitting on what seemed to be the seat of a spacecraft, with the Earth and Chandrayaan-2 floating in the background. News18’s anchor was also on the Moon.

And then there was News Nation’s Deepak Chaurasia (who compelled me to come up with this blog), dressed up in a makeshift space suit resembling crumbled rain coat (from some roadside market of Delhi) and became an instant Twitter favorite. He justified the choice saying: “I am trying to understand what it would feel like to live on the Moon, since this is what we would have to wear.” He also asked three scientists questions about purchasing property on the lunar surface. Do you really mean it sir!

The Indian media also credited Prime Minister Narendra Modi and NDA government for Chandrayaan-2. With headlines such as ‘Ab chaand Modi ki mutthi mein’ on Aaj Tak, and ‘Desh ki sarhad se lekar chaand tak Modi’ on News 18, attention was diverted from the hardworking scientists of ISRO and was instead given to the PM.

Choosing to forego any scientist on the panel to discuss the mission, News18 linked ‘Ganpati Bappa’ to Chandrayaan-2, while Republic TV reported Sadhguru’s predictions on India and ISRO’s success. His predictions turned out to be inaccurate, but nobody reported that.

How can we forget to criticize Pakistan !

India-Pakistan relations have already been in a tailspin all year due to Pulwama, Balakot and now the abrogation of Article 370 in Jammu and Kashmir. News channels did not miss this opportunity to let the world know what India has achieved, and what Pakistan has not. 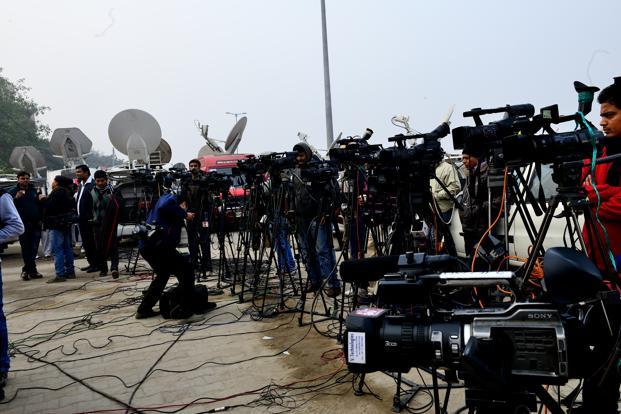 I know the TV news channels must have worked day and night for this day, the graphics team might be working overtime to give the feel of sitting on moon in the studio. The people on the desk, must have written five other headline before deciding on one like “Ab chaand modi ki mutthi main”. I am sure the programming team must have been running continuously in nine hour shift to get the packages done from the video editors (editing and re-editing 100 times!). The Voice-over artist must have been trying hard to give the feel of a voice of astronaut in spaceship. The interns might have been in sun for the whole day to search the perfect rain coat for Deepak chaurasia. I know many reporters who were in field for the whole night (discussing salaries and other jobs, over a cup of tea!), I know the whole scene is the outcome of tedious hardwork and mental pressure to be the first and the best.

But, isn’t it the time to realize that the news was important, the viewers were stuck to news channels because they wanted to get the glimpse of the historic landing, they wanted to get minute to minute update of the mission and chandryaan landing. And Not the virtual moon effect these news channels were trying to create. Modi and NDA bashing is OK (if you get paid for that) but do this news requires ‘Desh ki sarhad se lekar chaand tak Modi’

Its high time to do a self-check. Its the time to actually think what are you trying to show to viewers? Atleast, try to understand what people want to see or else come with a reason for showing such news with so much of drama… “Nation wants to know”, and this time Yes, we do.

*images inserted are not mine and taken from google image search